A good bike lock does more than give you peace of mind: it deters thieves by making it harder for them to pick the lock and hack, pry open, or grind through the body.

The best bicycle locks are thick enough to make it riskier for a thief to steal your bike. At the same time, they’re light and compact enough to allow you, the cyclist, to get around without lugging 10-15 pounds of metal.

With that being said, temper your expectations:

No bike lock can stand up to the angle grinder, and most bike locks can be cut through in under a minute if a thief is given the opportunity. You want a lock that’s sturdy enough to make thieves think twice—and move on to an easier target—when they lay eyes on your bicycle.

Tests have shown that cordless, battery-powered angle grinders can open most locks in 30-40 seconds. Locks that take longer, chains or U-locks, are expensive and heavy. So, if you’re looking for maximum protection, you have to be willing to pay up and carry more.

We’ve rounded up the best bike locks for you so that you won’t have to.

We’ve also created a useful guide to help you select the right one depending on where you live, how much you’re willing to spend, and what kind of protection you want for your two-wheeler.

Best Bang for Your Buck 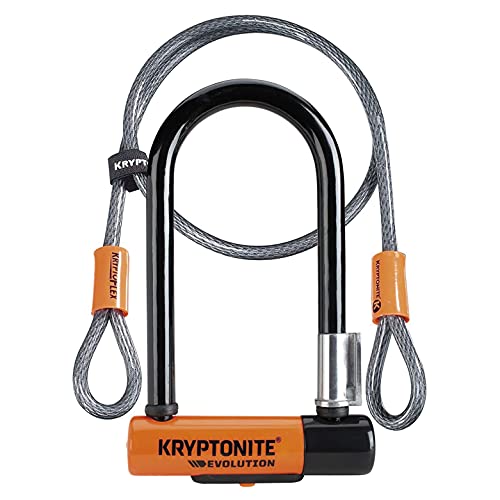 This lock’s hardened 13mm shackle resists bolt cutters, hand tools, and pry bars. With the extra, 10mm steel cable, you can secure your front wheel without the need for a second lock.

He named his company Kryptonite and began touring the U.S. in his Volkswagen van to promote his new type of lock. With some clever publicity stunts, like locking up a three-speed bicycle to a signpost in Greenwich Village, where it lasted 30 days, Kryptonite locks became a favorite among cyclists in the country.

Fifty years later, Kryptonite continues to make some of the most sought-after bicycle locks on the market thanks to their toughness. This one offers the best bang for your buck, though you’d probably want to think twice if you ride in a big city and park in bad neighborhood where thieves stop at nothing to get what they want.

The Kryptonite Evolution Mini-7 has a hardened 13mm steel shackle that resists bolt cutters and hand tools. Its double-deadbolt design gives additional protection against twist attacks—when a thief inserts a crowbar and tries to twist the lock open.

Though, if you want to make it harder on someone to steal your bike, you probably want to buy two of these U-locks so that you can lock the front and the back tire, along with the frame in two spots, separately.

The lock has Kryptonite’s limited lifetime warranty. If you lose your keys, Kryptonite will ship a pair of keys globally to you for free. Just make sure you register your keys online, on the manufacturer’s website. In case you lose them, too, you can order more for a price.

All in all, this lock is a great option for riders in small communities and rural areas where a moderate level of protection is more than you need to keep your bike safe. It’s also good enough for low-value bikes parked in busy racks that give thieves other options.

OnGuard BRUTE is a hefty U-lock with a 16mm thick hardened steel shackle that resists cutting, jacking, and prying with hand tools. Go for it if you want something slightly thicker than our pick above.

SKUNKLOCK V2 is a different kind of U-lock that takes an… interesting angle on bike security. Cut or force it open, and it will release an irritant for the eyes and skin. It skunks thieves out! 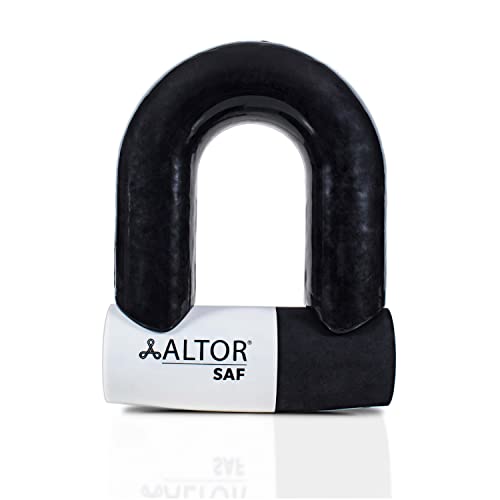 With a diameter of 80mm, the shackle on this bulky and heavy lock is as thick—or thicker—than most racks. If you want maximum protection for your bike’s frame, this is it.

Cordless, battery-powered angle grinders have become the new norm for bike thieves. But most bike locks on the market are designed to resist hand tools, like a hacksaw or a pair of bolt cutters, and can be opened with power tools in 30-40 seconds.

Made by Kickstarter phenomenon and Washington, D.C. based company Altor Locks, the Altor SAF is the world’s only angle grinder proof bike lock.

This bike lock isn’t for every rider. Weighing 13.7 lbs (6.2 kgs), it’s heavy. With a shackle diameter of 80mm and the same inner lock width, it’s ridiculously bulky. It’s so bulky, as a matter of fat, that you’ll have to carry it in a backpack and it will only fit the frame and the rack. So you’ll need a couple of other locks for the tires.

Compared to all of our other picks, it’s also expensive. So why would you want it?

If your bike is vintage or custom and the frame is valuable—and, when I say valuable, I mean carbon fiber or titanium valuable—you will want the best protection money can buy. Until someone invents a thin U-lock that stands up to angle grinders, this is it.

The Altor SAF isn’t the type of lock you take with you wherever you go. Most cyclists will want to leave it at their destination, be it at home, school, or the office, and use it to “cement” the bike frame to the rack after they’ve locked their front and back wheels to the frame and rack with something else.

The Sportneer Bicycle Chain is a 3.2 ft (97.5 cm) bicycle chain with a five-wheel combination lock that makes security affordable.

This folding bicycle lock with 5mm hardened-steel links is 33 in (85 cm) long and weighs just 2.35 lbs (1 kg). It includes a transport bracket for frame mounting and easy transportation and a sliding dust cover for protection from the elements.

If you’re looking for a moderate level of security for your bike without having to carry a chain lock or U-lock, the Kryptonite Kryptolok 685 Fold is one of the best options on the market.

This foldable lock is about as compact as they get. It folds up nicely so that it doesn’t take up too much space—and comes with a transport bracket that you can easily attach to the seat tube of your frame so you can get around town fuss-free and without hassle.

The bars and washers are made from 5mm thick hardened steel, self-rated 6/10 for moderate security by Kryptonite. As with all other Kryptonite locks, this one comes with a limited lifetime warranty and the manufacturer’s Key Safe program. If you lose your keys, Kryptonite can ship 2 keys to you (for free) globally.

The Kryptonite Kryptolok 685 Fold is suitable for quick stops in metropolitan areas and suburbs, as well as longer lock-ups—a few hours to a few days—in quaint towns and rural areas where people know one another and bike theft is less common.

It can’t stand up to an angle grinder, but neither can any lock from our “Best Portability” category. With the locks in this selection, you trade security for more convenience and the ability to move around without carrying pounds upon pounds of extra weight.

One Amazon customer describes the Sigtuna Folding Bike Lock as “tougher than you think.” This lock is made from hardened 8mm steel bars and sturdy rivets to deter bicycle thieves with hand tools.

The FoldyLock Classic Folding Bike Lock boasts a patented design with hardened steel and reinforced rivets said to resist bolt cutters, hacksaws, cuts on the rivet side, and freeze attacks.

How Many Locks Do You Need?

If you live in a major city where bicycle theft is a real problem, such as New York City, San Francisco, London, or Amsterdam, you should lock your bicycle with two locks for maximum security.

Related: How to Lock Your Bike Without a Rack

If you live in a small town or in a rural area where bicycle thefts are less common, riding around with two locks is overkill. In such a case, one lock to wrap around the rear wheel, the frame, and the rack or fence should be more than enough to give you peace of mind while at the dry cleaner’s or grocery store.

Our best-bang-for-your-buck pick, the Kryptonite Evolution Mini-7, has an additional steel cable that lets you secure not only the rear wheel, but the front wheel as well. (This, among other reasons, is why this lock ended up at the top of our list).

How Long Should My Lock Be?

The best length for a bicycle lock is the one that allows you to secure your bike to the anchors you use most often with minimal clearance between the frame and the anchor. This is especially important if you opt for a U-lock; most bike thieves will use crowbars or modified car jacks to force open the lock.

Common sense is as important as your lock’s traits and features. Generally, you want to park your bike in high-traffic, well-lit areas with busy buildings, surveillance cameras, and police and security guards around. Secluded areas and back alleys make it all too easy for a thief to break the lock, especially come nighttime.

Related: How Long Can You Leave Your Bike Locked Up?

Your bike lock should never touch the ground or rest on it. That makes it much easier for a thief to smash it in with a hammer or cut it open with an angle grinder. Instead, it should be in the middle of the bike, with little or no wiggle room, preferably in a position that makes it difficult to pick the lock.

Alas, no lock is bulletproof. A determined thief will get to your bike one way or another. So don’t give them the opportunity by properly locking your bike and not leaving it out in public for more than 6-12 hours.

If your bike is expensive, prepare for the worst with bike insurance and don’t assume the worst will never happen to you.

All Our Picks in One Place

Best bang for your buck: The Kryptonite Evolution Mini-7, with OnGuard BRUTE and SKUNKLOCK V2 also worth considering.

City dweller. Recreational cyclist with a knack for writing. Always trying to find the right balance between life and bike.

View all of Dim Nikov's posts.

As an Amazon Associate, Bicylo.com earns from qualifying purchases. If you buy through the links in our posts, we may earn a commission. Learn more