Whether you’re buying or building a bike, the frame is one of the most important components to choose. To a large extent, the frame determines the bike’s comfort, stability, and performance.

Bicycle frames can be made from various metals, with steel and aluminum by far the most common and affordable. Aluminum frames wear out quickly and can crack after several years of use, which is why some cyclists opt for steel frames instead.

But steel frames have one major drawback—and that drawback is called rust.

If the frame of your bike is made of steel, it may rust if you park the bike outside, especially in rain or snow. In addition to that, steel corrodes and rusts faster in humid climates.

In this post, we will talk about why steel frames corrode and rust, and what you can do as a bicycle owner to minimize that damage and extended their useful life.

What Causes Steel Frames to Corrode and Rust?

As a metal, steel is prone to corrosion and rust.

Corrosion is when the steel deteriorates because the atoms on the surface have come into contact with the oxygen in the air and, as a result, have oxidized. Rust is a form of corrosion that requires the presence of both air and moisture.

Contrary to what some people think, corrosion is what really weakens steel. Rust causes its surface to flake off and worsens corrosion. Combined, corrosion and rust can weaken a frame and cause it to fatigue faster than it otherwise would have.

Why the Paint Job Plays a Bigger Role Than You Think

The reason why you won’t see corrosion and rust on a new frame, or one on a bicycle that’s rarely used and stored in a building, is because the paint job—which protects the metal from exposure to the elements—is still intact.

The older your bike gets and the more you use and abuse it, the more likely you are to damage the paint job (and underlying primer).

Just think of the many ways to scratch a frame!

The possibilities are limited only by the imagination and ingenuity of the rider:

Even if you’re the most prudent rider on earth, it’s nearly impossible to not chip the paint on the frame.

As the bare steel of the frame’s tubing gets exposed, this invites corrosion and encourages rust, which, in turn, leads to more corrosion.

All it takes is a chip on the paint job of one tube. The chip turns into a rust bubble, which causes the paint to flake off, which helps the corrosion and rust spread. The result is a self-perpetuating cycle of corrosion, rust, and corrosion that’s hard (but not impossible) to reverse.

Don’t Forget the Inside of the Frame

What if you didn’t chip your frame’s paint job, but it neverless caught rust?

Not all bicycle frames are created equal, and some frames simply aren’t built to withstand the test of time.

At the bottom of the frame, where the tubes meet at the bottom bracket shell, is a fantastic location for water to collect inside the tubes. Some frames have vent and drain holes to let hot air escape and prevent water from pooling.

Water has a way of getting inside the seat tube, especially if you keep your bike parked outside, so you have to find a way to somehow let it out.

How to Protect a Steel Bike Frame From Corrosion and Rust

If your bike has a steel frame, inspect the frame for chips, scratches—and the corrosion and rust that follows—every month.

The key is to find and repair chips and scratches on your bike’s frame before they’ve caused the metal tubes to corrode and rust, whether on the outside or the inside.

When you come across a chip or crack anywhere on the frame’s tubing, you’ll want to fix it.

Clean your bike with warm, soapy water, then give it a good pat down and wait a few hours to a day for it to completely dry.

Meanwhile, go to the home improvement store and get yourself some paint (depending on the availability of colors, you can go for brush paint or spray paint).

Treat the chipped or scratched part of the frame with an alcohol wipe, then sand the area down with fine sandpaper. Blow the dust off, wipe it down again, then allow the alcohol to evaporate and apply the paint on the tube.

If you’re applying brush paint, use sandpaper again to smooth the coat. When you’re done, polish the area and you’re pretty much done.

GCN Tech have a helpful video on their YouTube channels that walks you through the ins and outs of this.

Coat the Inside of the Tubes

If you keep your bike parked outside at all times, consider applying rust inhibitor to the inside of the tubes.

To do this, you’ll probably want to strip the frame naked from all other components. It’s not that you couldn’t do this otherwise, but it will be much trickier—and clean up will be harder.

Frame Saver used to be the best product for the job, but I’ve been having a really hard time to get a hold of it as of late. Generally, any oil that sticks to the inside of the tube and coats the metal will do. 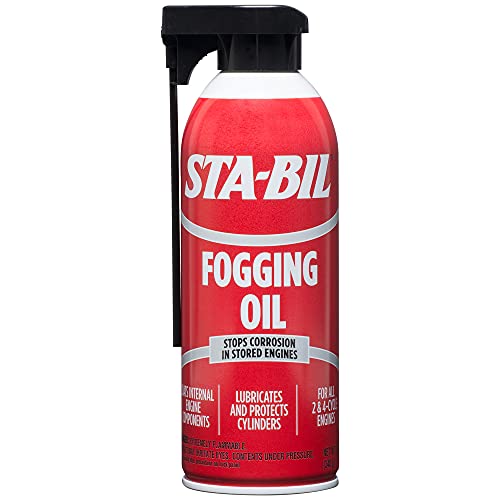 Coats the interior of metal parts to prevent corrosion. Displaces moisture to protect from rust. Coats and lubricates the metal surface.

Consider using Sta-Bil Motor Fogging Oil. Spray the oil into the tubes through the vent and/or drain holes, then turn the frame over and hold it in different positions for a while to allow the oil to grease the inside of the tubes all over.

Yes, metal bicycle frames rust. And no, when it happens, it isn’t pretty. A rusty frame is a frame that fatigues faster than it normally would, to the point where it’s no longer safe to ride and is about to give in.

The good news is that with monthly inspection and a little preventive maintenance with fogging oil, you can protect your bike’s frame from corrosion and rust on the outside and the inside, extending its useful life for longer.

City dweller. Recreational cyclist with a knack for writing. Always trying to find the right balance between life and bike.

View all of Dim Nikov's posts.

As an Amazon Associate, Bicylo.com earns from qualifying purchases. If you buy through the links in our posts, we may earn a commission. Learn more